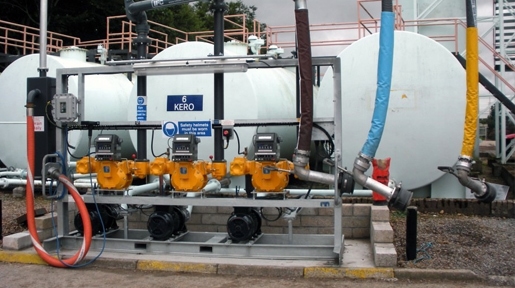 Carrs Billington is one of the largest authorised oil distributors in the UK. They currently cover the North of England and South of Scotland. Carrs Billington supply a wide range of fuel and lubricant products to homes for domestic, farms for agricultural and commercial use to customers.

Carrs Billington operate as Johnstone Wallace Oils in South West Scotland, Wallace Oils in North Cumbria and Carrs Billington Fuels around Lancaster, Northumberland and West Cumbria. IFC Inflow was asked to supply an electronic skid for safe tanker loading to a new depot as part of an ongoing depot upgrade and development programme.

The main goal of the project was to provide a fast and safe tanker loading system to allow an increase in sales of their fuel products. A safe tanker loading skid with electronic controlled bottom loading arms was suggested by IFC. IFC also recommended bulk flowmeters0 with flow rates of up to 1200 l/min, fitted with the latest 5 point skid safety system.

For monitoring and controlling the fuel stock being loaded through the skid, MHT Terminal Automation software was installed for complete depot automation.

A MHT VTW tank gauging system allows accurate stock reconciliation both locally and by a remote link to head office. High-level tank alarms and digital field displays were fitted for added depot safety. Tank gauging was made easy by implementing this system for monitoring oil and fuel stock levels in bulk storage tanks at the depot.

IFC provided all site mechanical and electrical works along with full equipment commissioning.

Successfully supplied and installed on time and in budget allowing the depot to open before the busy winter period. The new equipment now provides faster tanker loading up to 1200l/min combined with an enhanced depot and operator safety with more accurate stock control systems.

“Our depot is up and running within the projected timescale and we could not be happier with the outcome of the project”
– Nigel Hiller, Carrs Billington