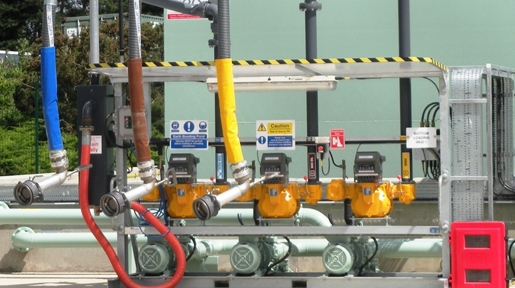 Nicholl Fuel Oils are a family run business and have been trading in Ireland for over 50 years. They have grown in size considerably in that time and now operate out of 6 depots making them Northern Ireland’s largest independent oil distributor. Nicholl Fuel Oils supply both domestic and business clients, and are also a major supplier in the Industrial/ Commercial market with an existing customer base, which ranges from sole traders to multi-national companies.

They needed 4 new bottom loading skids for newly developed depots to improve their operations across Northern Ireland. They also wanted us to use the same batch controller and depot automation software as was installed on all the previous skids supplied.

IFC proposed our popular ADE80-4 4 arm electronic bottom loading skid. Nicholl Fuel Oils wanted a consistent system across all 6 of their depots, so we were tasked with integrating the existing batch controller and depot automation software onto the new skids.

This was rolled out to all the skids we supplied and has proven successful. We worked closely with the German-based electronic batch control supplier, which enabled us to fully understand the setup process using this new system.

As standard, the skid system was fitted with our 7 point safety system. A weather canopy was also supplied along with hose protection sleeves.

The skids were all delivered to the site on time and within the client’s budget. The skids are now installed and fully operational meaning that Nicholl Fuel Oils can now cover all of Northern Ireland, thus improving service and delivery times to their customers.

Both Colin and Hugh from Nicholl Fuel Oils have since requested quotations for another 2 skids for future depot developments.

Colin Nicholls, director of Nicholl Fuel Oils commented: “We are very pleased with the level of service and co-operation we have received from IFC, we know that we will receive a high-quality product and that we have the ongoing support and service for future projects and maintenance.”